You might or might not have heard the name of the Siem Reap. However, if you make a list of 50 things to see before you die, the ruins of Angkor Wat must be included in your list which can be visited from Siem Reap. 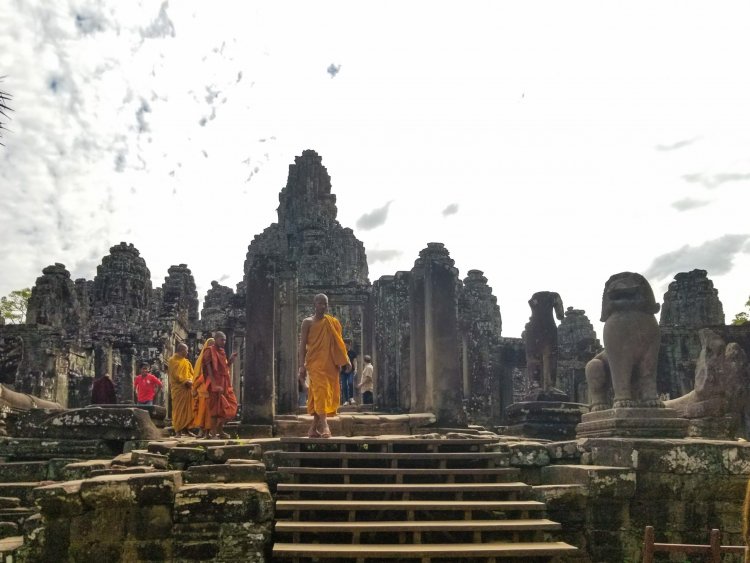 Imagine a 400 acres ancient temple complex that was built 900 years ago. Yes, I am talking about the largest religious monument complex in the world named Angkor Wat which means City of Temples according to the official language of Cambodia. Millions of people visit here to witness the vast and unimaginable Buddhist temple. To me, this is only comparable to the ancient pagodas of Bagan. Although, Angkor Wat is the most famous one here, there are several significant temples in and around Siem Reap. This is your ultimate photo guide to the top 5 temples you can visit from Siem Reap.

A long passage guarded by trees will take you to the main complex of Angkor Wat.

Among the temples in Siem Reap, Angkor Wat is the king! Along with the Pyramids of Giza, and the Taj Mahal, you will find the photo of these ancient ruins in some of the list of wonders of the world. It was initially built as a Hindu temple dedicated to the Lord Vishnu who is one of the three major Gods in Hinduism and known as the protector.

Standing in Angkor Wat means going back a thousand years.

The Angkor Wat was built during the Khmer reign in Cambodia. It took about 35 years to complete the construction work. The guess is, King Suryavarman II built these temples, but, you won’t find his name anywhere. It has become so important for Cambodia, you can see the photo of Angkor in their national park. This is also a great source of their national revenues in the form of tourism.

It’s hard to capture the vastness of the temple with a camera.

Although it’s a religious complex being a temple, the main objective was building it was to claim power and authority. The king wanted to show the world his political supremacy. Interestingly, almost everything here was built using stones, an astonishing achievement considering the subtle designs.

A stair will take you up and given you an opportunity to have a top view.

There are numerous structures inside the main complex of Angkor Wat. A steep stair will take you to the top. From there, you can enjoy a good view of the surroundings.

Even the boundary of Angkor Wat looks gorgeous.

The Angkor Wat temple is surrounded by an expansive wall. This separates the inner portion from the outer complex. The boundary is a significant part of the complex, an aerial view can provide you a better understanding. If you look at the walls carefully, you will find intricate designs especially on the corners of all the sides.

A beautiful fresco on the wall of Angkor Wat.

The walls consist of beautiful frescos and carved bas reliefs. All of them depict some ancient stories. Most of them are related to Hindu mythologies. The most famous one is the churning of the sea of milk. It tells a story where God claims power over the evils through a fight.

A closer look at the fresco on the wall of Angkor.

I mentioned stories from Hindu mythology. The two notable ones are the Ramayana and the Mahabharata. If you have prior knowledge of them, you will be able to identify the Pancha Pandava, the Battle of Kurukshetra, Vishnu, Vasuki, and even Ravana – the evil.

Intricacies on the wall of Angkor Wat.

If you think that, it’s all about the war, you will be mistaken. The 1200 square meters of the carved wall has many more interesting things. While exploring the ruins, watch out for the windows. They will give you some great views of the surroundings. No wonder, this place has been rewarded as UNESCO World Heritage Site. Do not forget to book a sunrise tour, Angkor Wat looks amazingly beautiful during that time.

Ta Prohm Temple looks like been taken from a page of an ancient book.

Did you watch the popular film Lara Croft: Tomb Raider where Angelina Jolie went out for a series of adventures? If you watched the film and look at the photos of Ta Prohm carefully, you would recognize the places. A part of the shooting of this film took place in the Ta Prohm temple in Siem Reap.

Some of the ruins are kept as it is on the ground.

Among the temples in Angkor, Ta Prohm Temple remains as close to the original version as It is mostly untouched. Most of the other temples were like this when it was discovered by the Europeans. It’s a prime example of how an ancient ruin can turn out to be if the surrounding forests are untouched.

These trees at Ta Prohm Temple are humongous.

As a result of this, the temples are embraced with thick roots of gigantic trees as if a number of muscular pythons had strangled the complex. It feels like nature has taken over man-made architecture in course of time. The giant trees themselves are no lesser attraction than the temple complex itself.

Carvings on the wall of Ta Prohm Temple in Cambodia.

Like the Angkor Wat temple, this one also has carved statues on the wall. Some of them are in a dancing posture, some of them are in meditations. A stone was discovered here and a lot of information was extracted from it.

An eery passage in the Ta Prohm Temple in Siem Reap.

A thin long passage with decorative pillars and rooftops added an eery feeling to this temple. Imagine yourself walking here 900 years back when the world was quieter.

The authority is trying their best to preserve the ruins.

Unlike other temples in Siem Reap, this was built as a Buddist monastery as King Jayavarman VII who built it was a follower of Buddhism. The largest stone face here is of Prajnaparamita, the mother of the king. The symbol of this temple depicts wisdom and learning.

Numerous monks with traditional yellow dresses are walking in the temple of Bayon.

Although Angkor Wat is the most famous temple in Siem Reap, for many the Bayon temple is the most favorite one! This is because of the countless gigantic stone faces found all over the place. King Jayavarman VII who built Ta Prohm Temple also constructed this. It means it’s a Buddhist temple.

If you count, you will find 216 faces in Bayon Temple, Angkor Wat.

When you will walk around in Bayon Temple, you will find gigantic smiling faces made of stone on the towers. It is said that these faces have a strong resemblance to the face of King Jayavarman VII. It has 54 gothic towers and 216 faces. Most of the towers consist of 4 faces, while some of them have 2 and 3 faces. You will even find a tower with a single face.

The temple is located in a place named Angkor Thom which was the capital of the ancient Khmer reign. You can enter the temple from 4 directions as the roads lead to the temple. Although it’s a Buddhist temple, you will find deities from the Hindu religion.

Lord Buddha is meditating in a calm place.

Sadly, most of the faces of the statues are eroded and showing signs of wearing out. Bayon complex is compact compared to the other famous ones. As there are lots of statues here, the game of lights and shadows becomes interesting as the day progresses.

Most of the sculptures in Bayon is located on top of a base.

Apart from the statues, you will find two major galleries. One of them is decorated with the tales from battles as well as the lifestyles of the villagers during that time. The other one mainly consists of different mythological characters and tales.

You will see the faces of the sculptures of the Bayon temple, ever wondered about the back?

Many archaeologists think of Bayon as the last temple built in the Angkor complex. They also think that Bayon symbolizes Mount Meru – the center of all the physical, and spiritual universes. Be it or not, this is a fascinating place to roam around and spend several hours.

Book your Temples and Waterfall trip

These doors are beautifully carved.

Enter into the world of red sandstone from black stones. Yes, it’s Banteay Srei for you! It was a pleasant change for my eyes to visit here as it looked different than other temples of Siem Reap because of its color.

The tourists (and travelers) are trying to understand different aspects of the ruin.

Contrary to the large architecture of Angkor Wat or Bayon temple, this temple has tiny establishments. Rather than having big architecture, it has intricate designs and carvings on the wall. This is a Hindu temple dedicated to Lord Shiva and Vishnu.

The feeling of walking through the ruins of Angkor is sublime.

The temple was built during the 11th century. The word Banteay Srei means the Citadel of the Women. It has such intricacies in the design, many think that it’s not possible for any man to build it. This square-shaped temple has two major entrances with beautiful gates.

If you look at the carvings carefully, you will see the depiction of the Hindu mythology Ramayana. It is believed to be built during the 10th century. Because of its pinkish look, it is often called the Pink Temple. Interestingly, it was not built by any king but a Brahman priest.

They must be one hell of a thing 900 years back (they are still now)!

This temple is a bit far from Siem Reap. It takes more than 30 minutes to reach there, but, the roads are in fairly good condition and you will get a chance to enjoy the remote sceneries of Cambodia. Do not miss this precious gem and the jewel of Khmer art during your Siem Reap trip.

Just outside of the Banteay Srei temple, locals were singing traditional Cambodian songs.

When I was leaving the complex, I saw a bunch of people singing using traditional musical instruments sitting under a big tree. They are the victims of landmines – a bi-product of the war that had been haunting the Cambodians for years. The tune had a kind of melancholy that made me sad for them.

The last one that made it into the top temples in Siem Reap is Preah Khan.  King Jayavarman VII built this temple in the 12th century in the honor of his father. This is a big site consisting of a moat, intricate sculptures on the way to the temple, and a stupa. A part of the temple was a library once. A wall depicts the battle of Lanka. This temple is comparatively less crowded than others, so, you will get it by yourself if you are lucky.

The post Top 5 Temples in Siem Reap appeared first on A Walk in the World.

How To Control Your Temper - 10 proven Tips

What is the Best Time to Visit Varanasi?

Exploring the Offbeat Sights of Ranakpur with Mana Resort