The capital city of Austria and home to nearly 2 million people, Vienna is a culturally and historically rich city with plenty of cheap, fun activities. Compared to other popular tourist destinations in Europe, Vienna is remarkably well kept and extremely safe. The city is huge and spread out, resulting in a less condensed city […] The post What to do in Vienna for 2 Days (under 15 euros) appeared first on Breath Taking Travels. 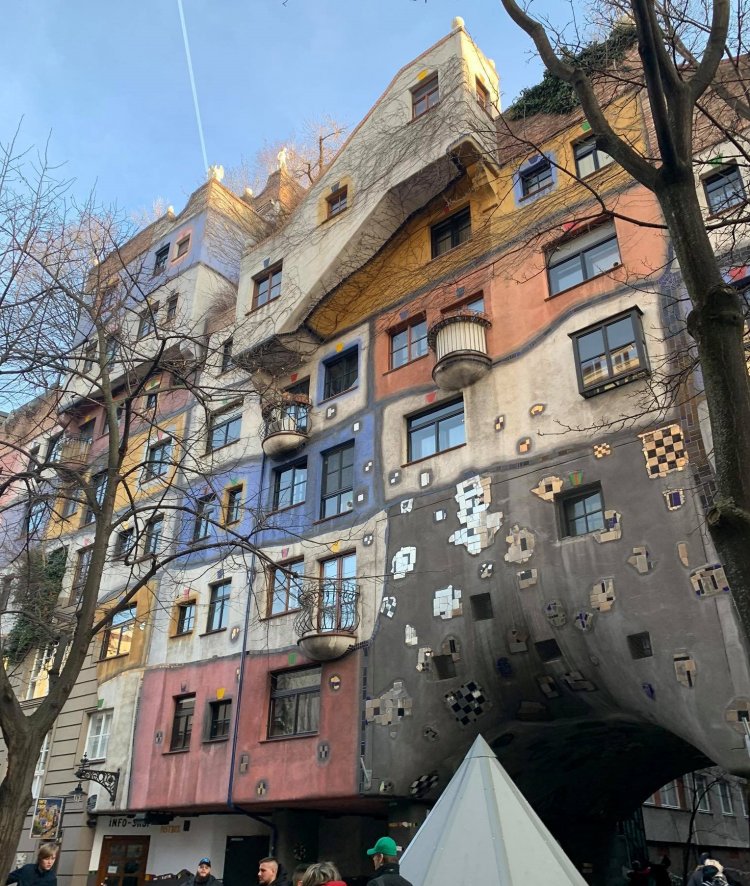 The capital city of Austria and home to nearly 2 million people, Vienna is a culturally and historically rich city with plenty of cheap, fun activities. Compared to other popular tourist destinations in Europe, Vienna is remarkably well kept and extremely safe. The city is huge and spread out, resulting in a less condensed city that is surprisingly peaceful and relatively quiet. The Economist Intelligence Unit ranked Vienna as “The Most Liveable City City” in 2019 and among other European cities, Vienna consistently ranks as one of the highest quality of life. I visited the city for 2 days and absolutely fell in love with the beautiful architecture and the friendliness and openness of locals. Aside from accommodation, In two days I only spent 40 euros total on food and attractions which goes to show you how cheap the city is. I have thus decided to put together a list of the most worthwile and cheap things to do in Vienna for 2 days. Everything on the list is either free or less than 15 euros. If you were ambitious, you could probably do all these things in Vienna in one day. I hope you enjoy!

What to do in Vienna in 2 days: 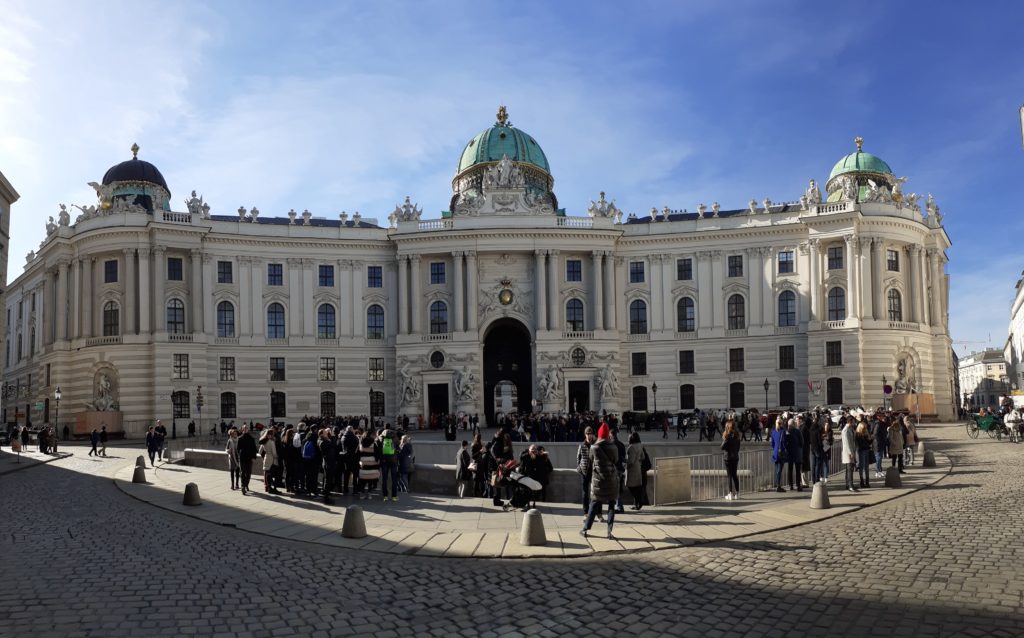 The palace is free to look out from the outside, offering great views of the pristine architecture. The entry cost to go inside the Hofburg palace is 12 euros. If you go on a tour of the palace, you can visit the museum, chapel, and famous library.

There is a cool archaeological remains site that is located right in front of the palace. According to the sign, some of the remains date back 2000 years. You can see the site in the picture below. 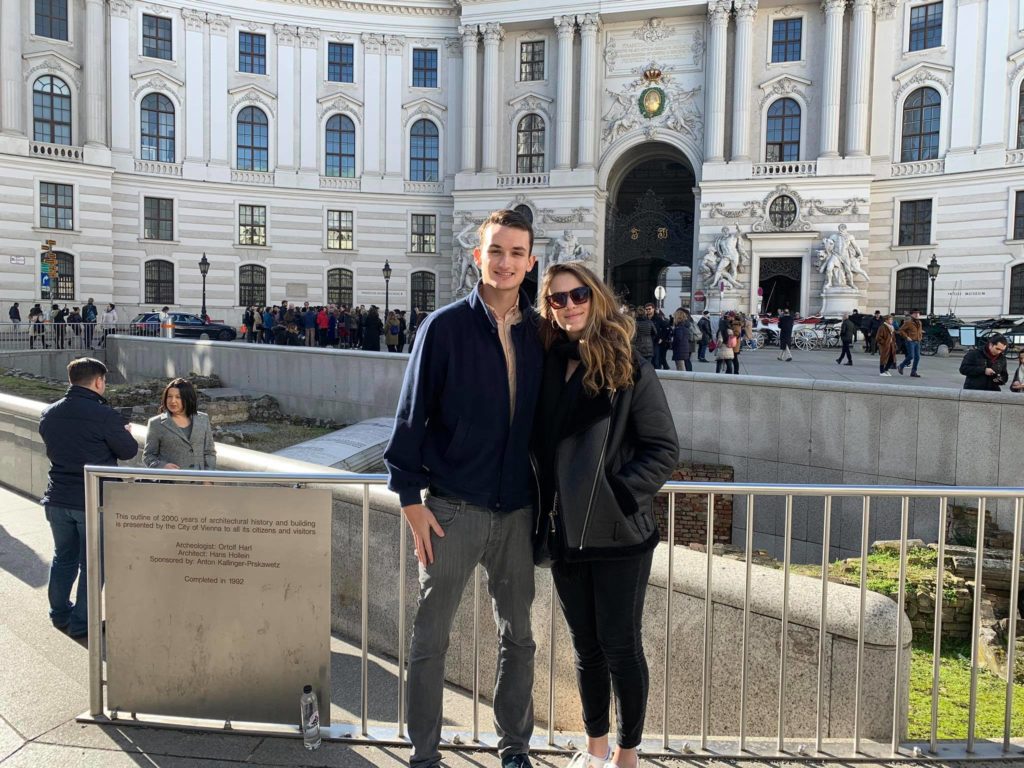 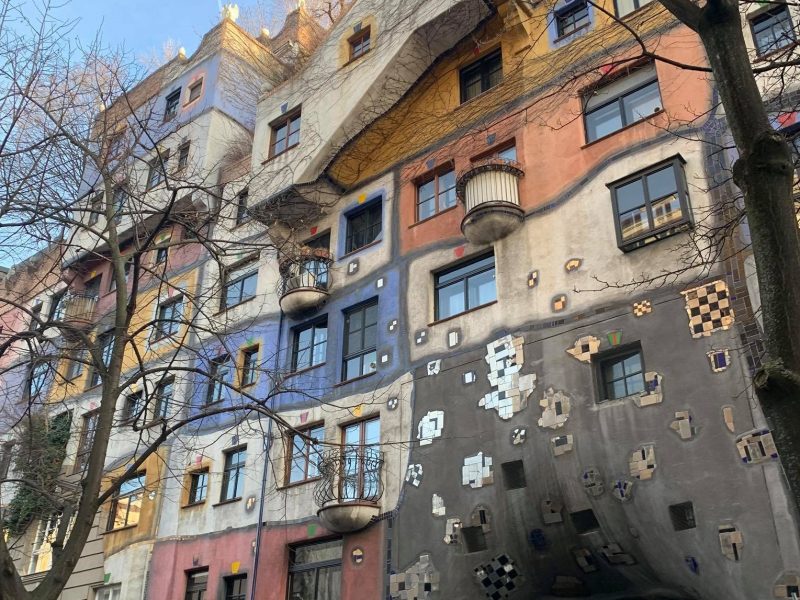 One of the coolest architectural buildings in Europe, the Hundertwasser village in Vienna Austria is a group of colorful houses conceptualized by the famous Austrian artist Friedensreich Hundertwasser. The Hundertwasser building was built in 1983 and features a beautiful array of colors and unique shapes. Although you can’t go inside the colorful apartments, you can view them for free from the outside. There is also a photogenic phone booth located on the same street. 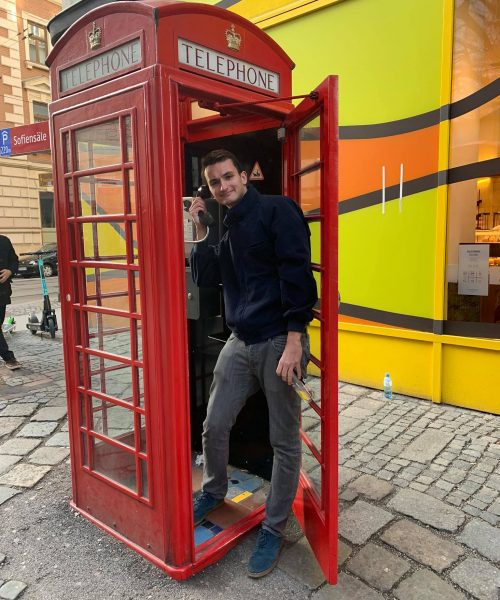 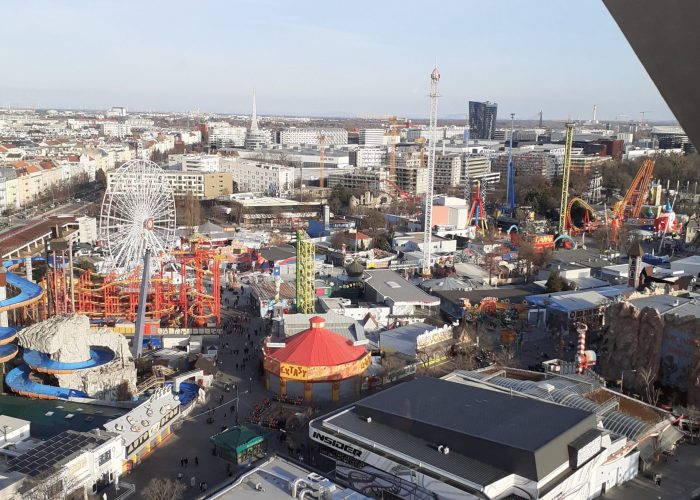 Prater Amusement park, also called Wurstelprater, is an amusement park located in Vienna’s 2nd district. The park features roller coasters, bumper cars, and the infamous Vienna Giant Ferriswheel (Riesenrad) which is 65 meters high. The Ferris wheel was constructed in 1897 and from 1920 to 1985 it was the world’s tallest Ferris wheel.

The entrance fee to Prater Amusement park is free, while each ride has its own cost. The cost of the Vienna Ferris wheel is 12 euros for adults and 5 euros for kids. There are also plenty of places to eat  street food within the park. 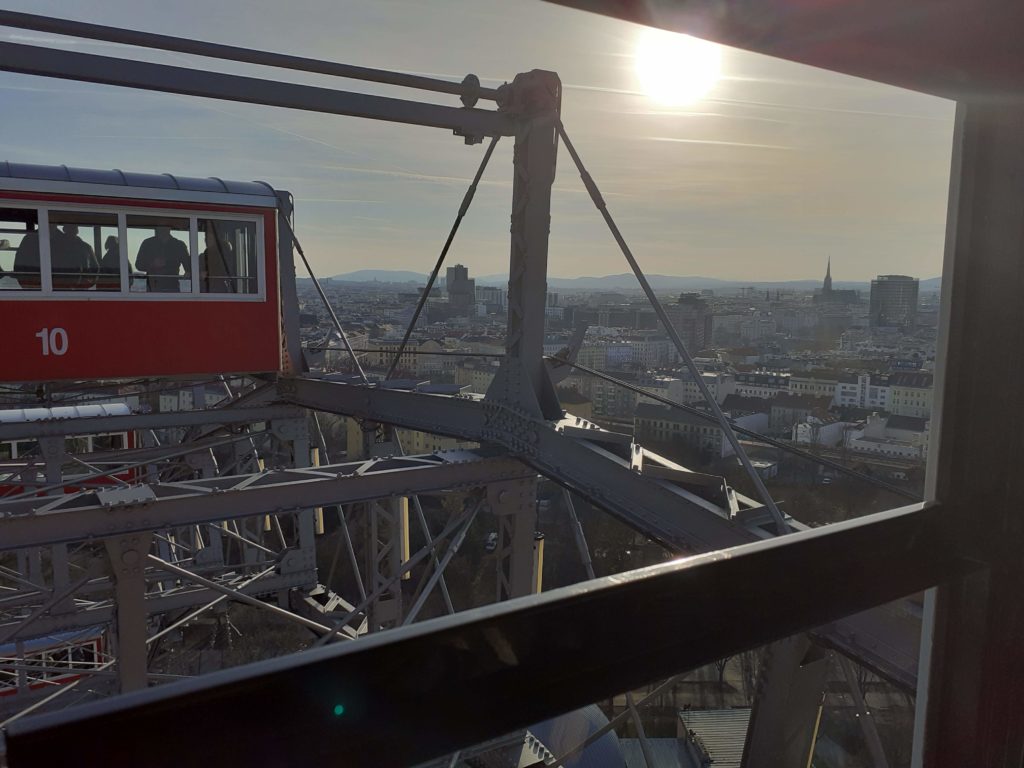 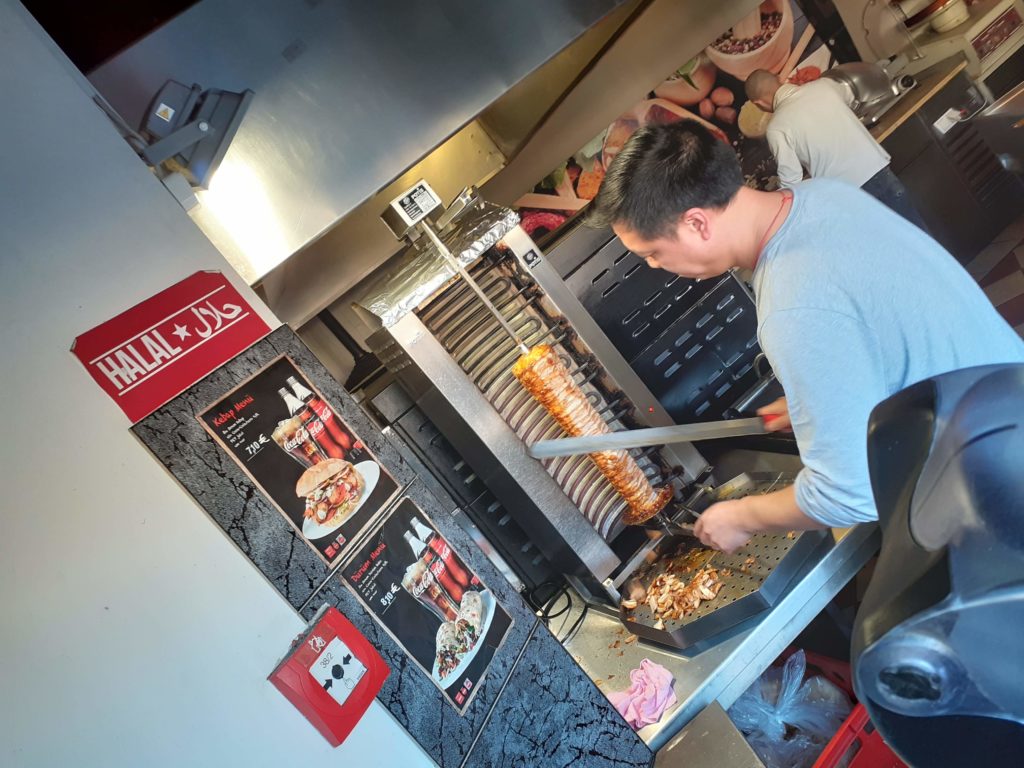 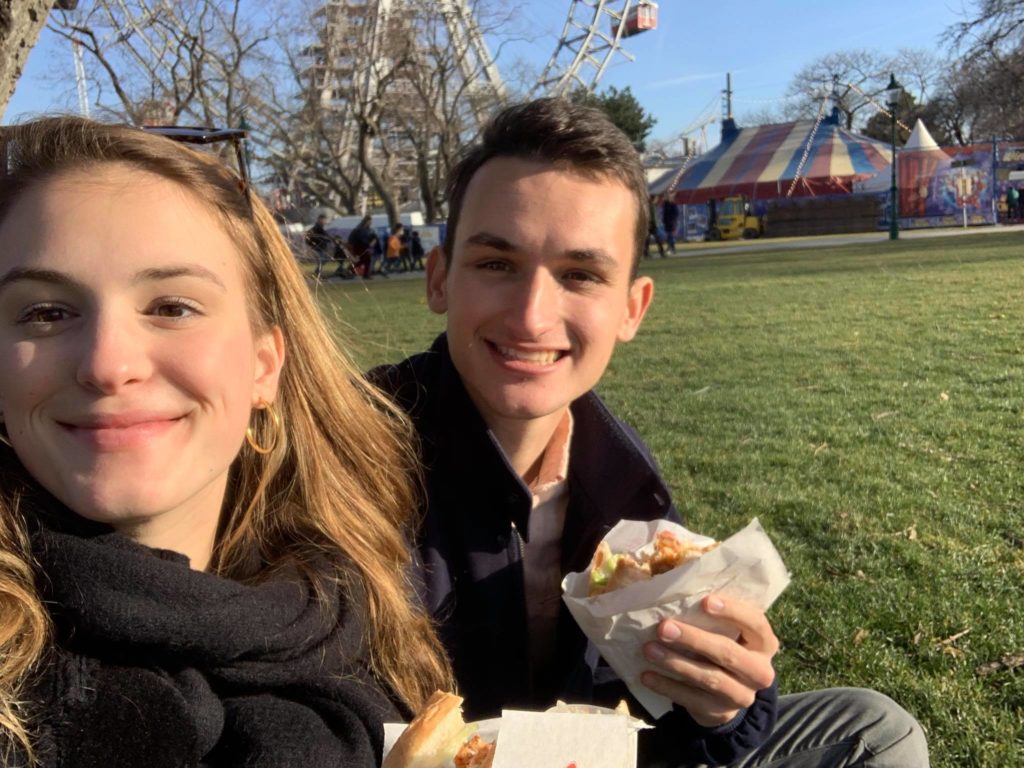 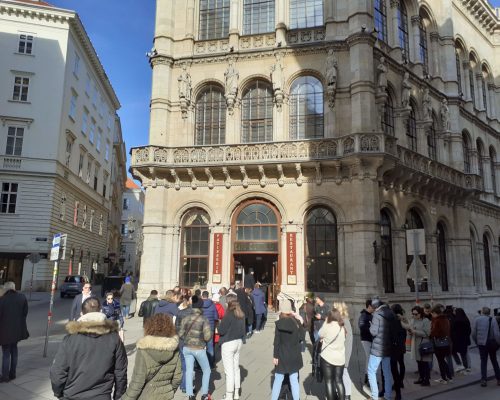 As you can maybe tell based on the line flooding out of this coffee shop, Cafe Central it the most popular coffee shop in Vienna, and maybe all of Europe. The cafe was first opened in Vienna’s first district in the year 1876. Beginning in the early 1900s, Cafe Central became a popular hub for chess players and powerful politicians. Most notoriously, Cafe Central in Vienna was frequently visited by Hitler before the Second World War. Other famous regulars include Josip Tito, Sigmund Freud, and Leon Trotsky.

We showed up to the cafe around noon and the line was already wrapped around the building. If you want to experience a good coffee in this historically significant building, you should go early in the morning. 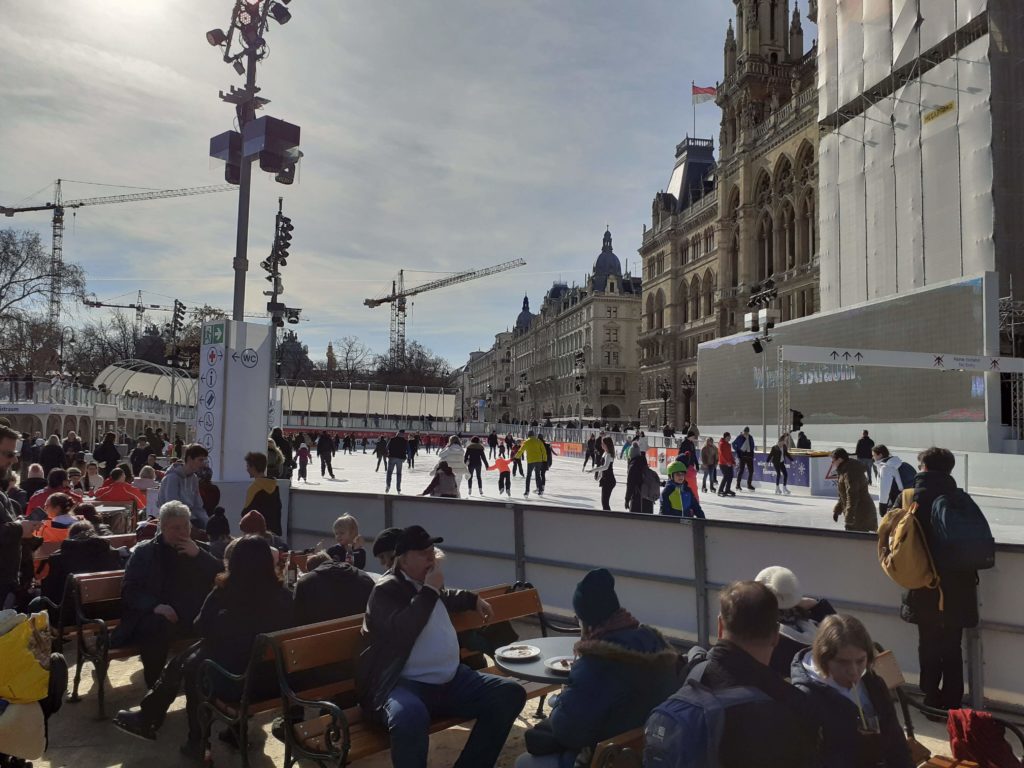 Perhaps the most crowded place in Vienna during the winter is the skating rink. There are actually multiple skating rinks located throughout the city, each one with its own special aesthetic and charm. The average cost for ice skating is around 7 euros for an half hour, and another 7 euros to rent ice skates if you need them.

Each rink is lined with amazing street food shacks as well as beer gardens. The beer gardens in Austria Vienna offer a peaceful, serene atmosphere. One pint of beer costs around 3-4 euros. 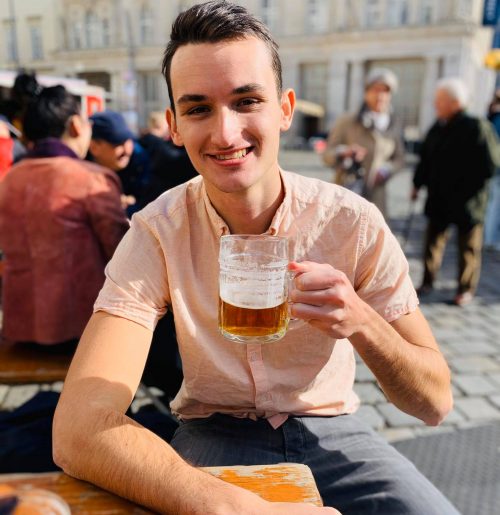 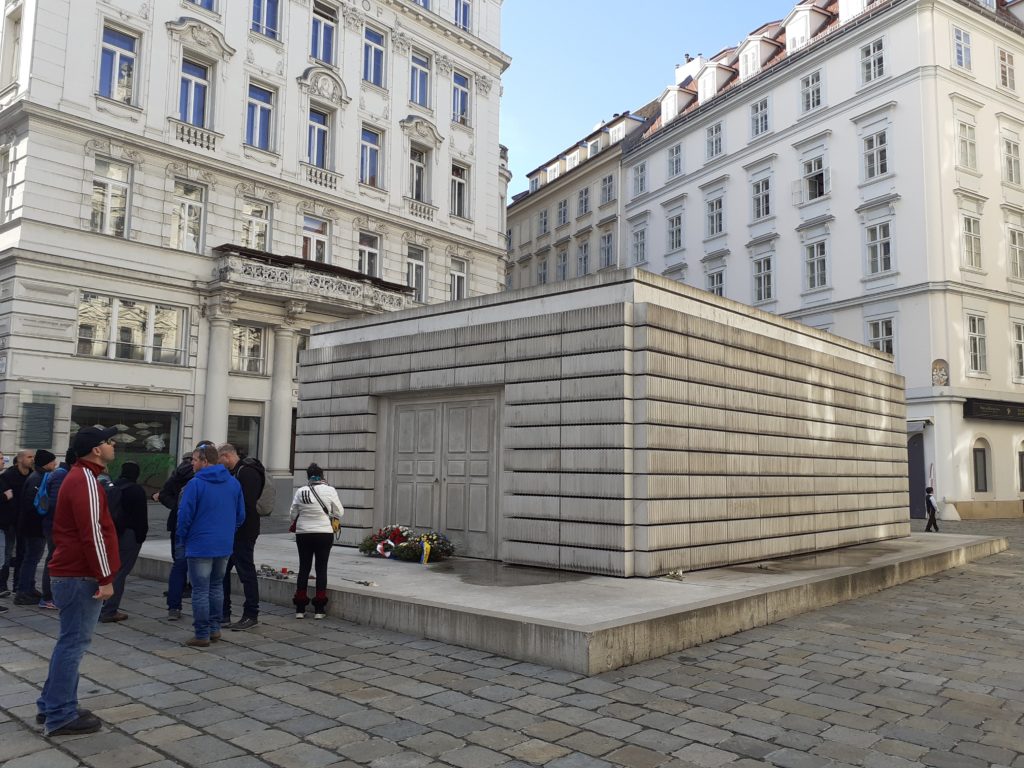 The Holocaust Memorial in Vienna, which is sometimes refferred to as The Nameless Library, is located in Vienna 1st district in Judenplatz. The memorial was finished in 2000 and is meant to honor the 65,000 Austrian Jews that were murdered during the Holocaust. The walls of the memorial are designed to look like book shelves, and the door to the memorial has no handle or door knob.

In the middle ages, Judenplatz was the center of the Jewish community and home to one of the largest synagogues in Europe. In 1421, the entire Jewish community was either expelled or murdered. The remains of the foundations of the destroyed synagogue are located underneath the holocaust memorial. Below is a picture of Judenplatz square today. 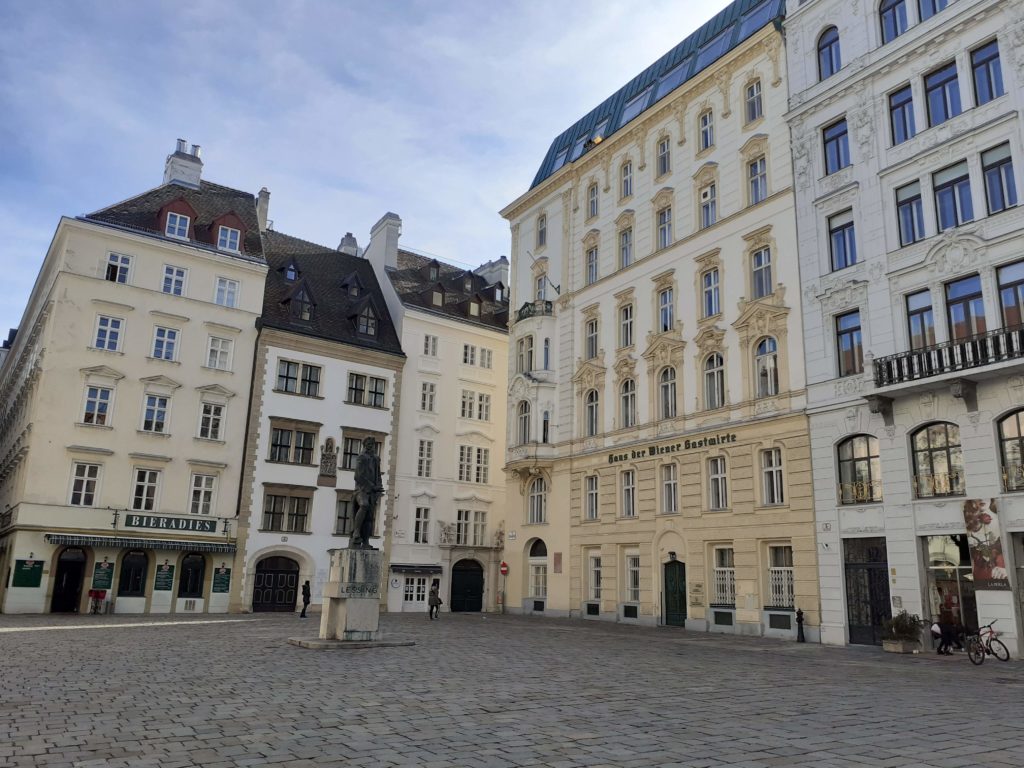 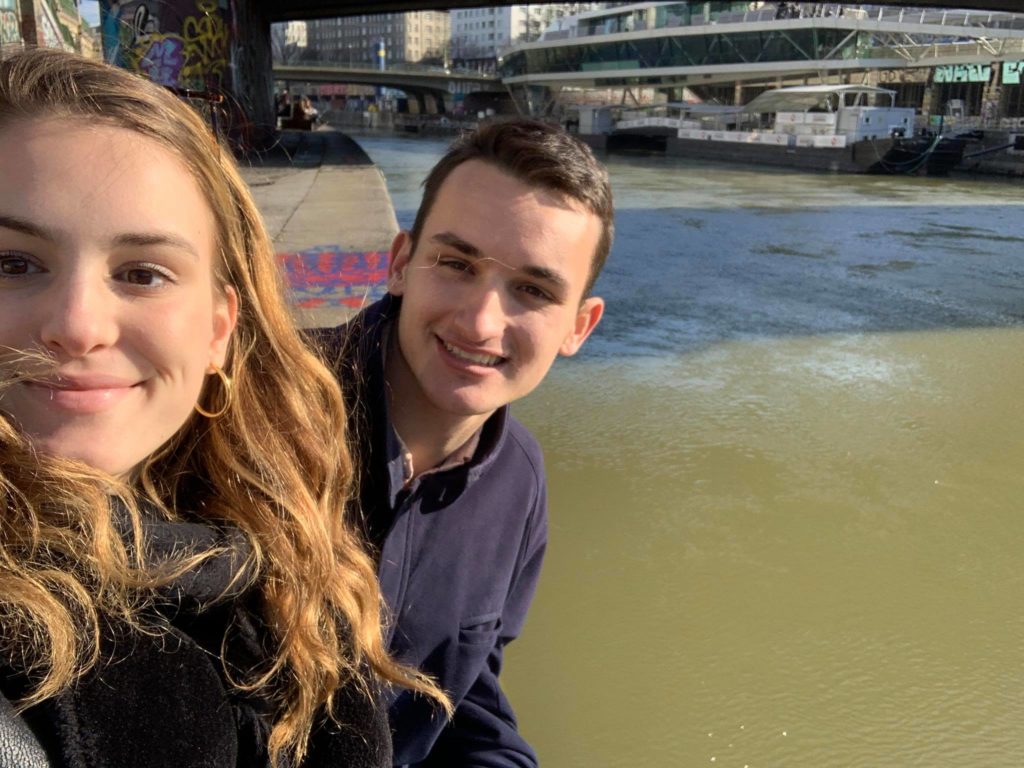 The Danube river meanders throughout the inner part of Vienna. There is a nice walkway by the river that is a great place to sit and relax in the sun. It would be a perfect spot for a picnic. At night, there are night cruises you can take down the river.

Here are a couple other cool photos from Vienna. 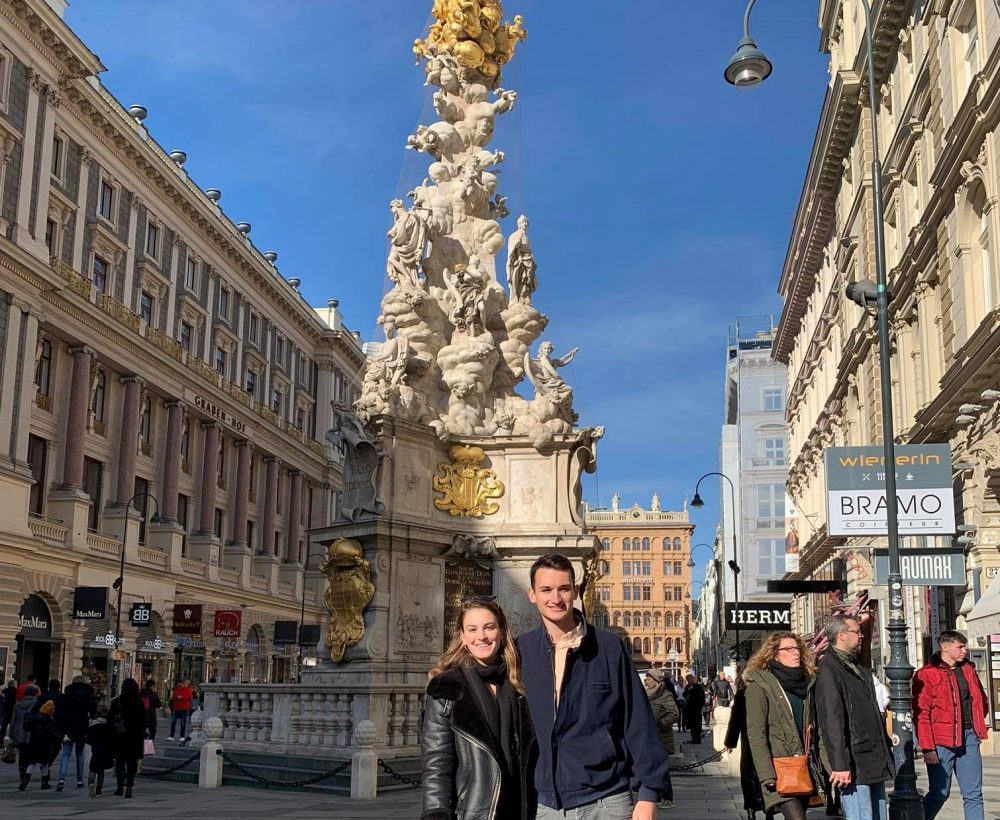 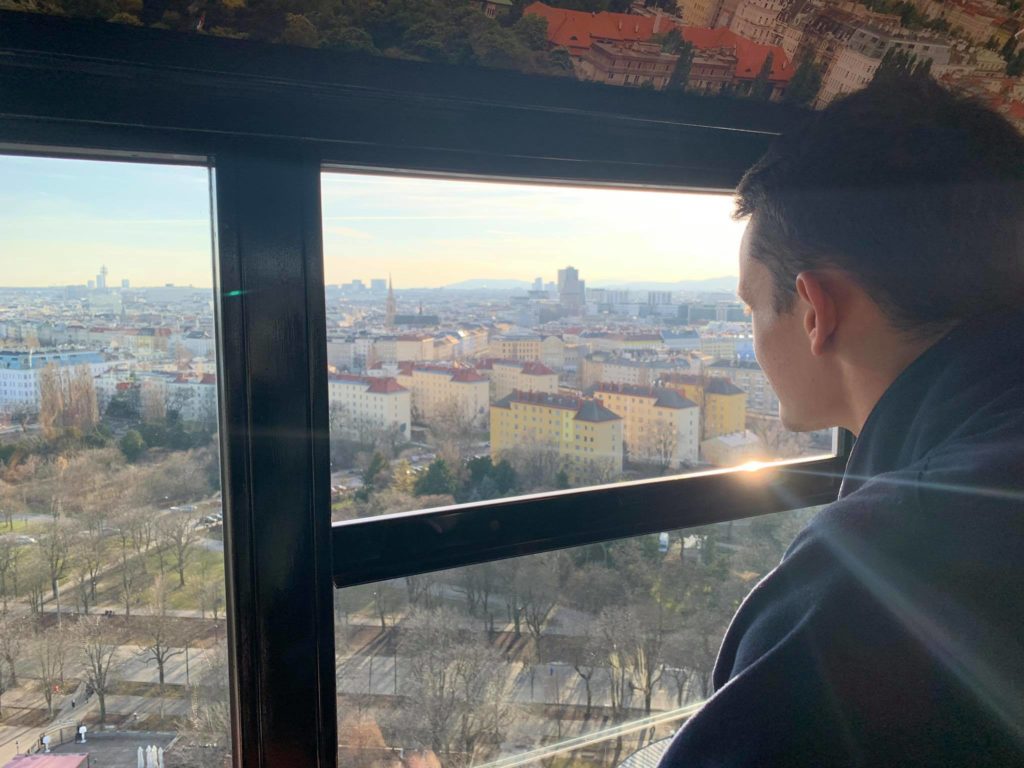 The post What to do in Vienna for 2 Days (under 15 euros) appeared first on Breath Taking Travels.