From the April Fair of Seville to the Canary Islands’ Carnival, Spain hosts a range of lively traditional festivals that puts locals and travelers in a joyous atmosphere thanks to a profusion of music, dance, and soulful typical dishes. But, surprisingly enough, one of the most fascinating festivals in the country revolves around a messy […] The post The Complete Guide To La Tomatina Festival, Spain first appeared on CuddlyNest Travel Blog. 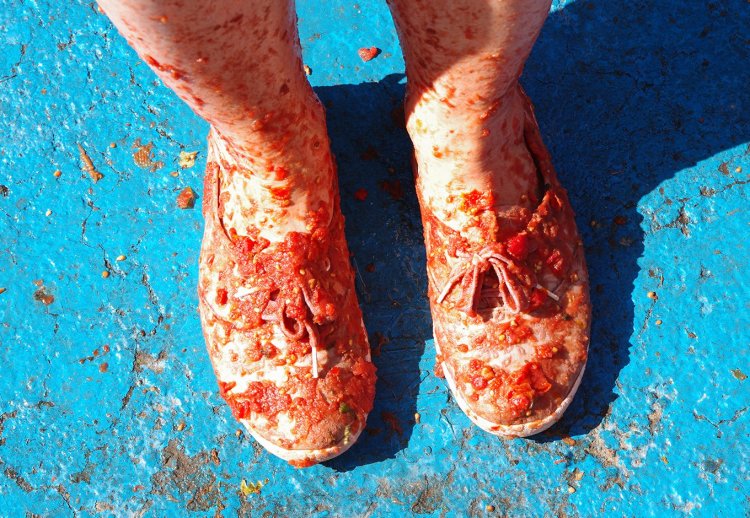 From the April Fair of Seville to the Canary Islands’ Carnival, Spain hosts a range of lively traditional festivals that puts locals and travelers in a joyous atmosphere thanks to a profusion of music, dance, and soulful typical dishes. But, surprisingly enough, one of the most fascinating festivals in the country revolves around a messy food fight.

Well-known across the globe, La Tomatina happens every year on the last Wednesday of August. The festival takes place in the city of Buñol, in Valencia, and it brings thousands of people who gather to basically throw tomatoes at each other for an hour. Fun, and chaotic, this worldwide praised tomato fight is a great item for travelers to include —and check off — their bucket list.

To help you make the most out of the festival, we created a comprehensive guide with everything you need to know about Buñol’s annual tomato fight. Added bonus? A few Valencia travel tips, which are guaranteed to keep you entertained for days. Have a look!

Note: Make sure to double-check COVID 19 precautions, protocols, and operating hours before you visit any of these sites.

Located on Spain’s southeastern coast, on the banks of the Turia river, Valencia is a lively port city adorned with a profusion of ancient Moorish buildings and Gothic constructions. Valencia is located within just an hour and a half from Madrid and three hours from Barcelona by train, and it’s widely known for hosting traditional festivals and celebrations, such as the Fallas and, of course, the famous La Tomatina festival.

With an average of 300 days of sunshine per year, Valencia is a great destination all year round. If you go during the summer, you’ll be able to enjoy some of the city’s finest beaches. But, in case you want to avoid crowds of tourists, try to go during the offseason, between May and June when the weather is still pleasant and warm.

What To Eat And Drink In Valencia

Worldwide known as Spain’s staple dish, paella originated in Valencia, and it’s a must-try for travelers who are visiting the region. But, differently from what many people think, the Paella Valenciana does not carry seafood, and it’s actually made with other typical ingredients, such as rabbit, chicken, bomba rice, and garrofón (a type of large white bean) among others.

For trying the best paella in Valencia, make sure you stay away from touristy restaurants where the dish is pre-made, frozen, and reheated. A flavourful and authentic paella is always made to order, and it takes at least 30 minutes to get done. Also, it should be served in the pan it was prepared in, and the bottom layer of the rice usually has a crispy caramelized crust, which is called socarrat. Some of the most praised paella restaurants in Valencia are the Restaurante Levante, La Pepica, Casa Roberto, Restaurante Navarro, and Casa Carmela.

Aside from trying the traditional paella, make sure you also sip in the staple drink of Valencia: horchata de chufa. Refreshing and perfect for hot summer days, this non-alcoholic creamy beverage is made with the milky juice of tiger nuts, and it originated in Valencia in the 13th-century. The drink is so popular across Spain that there are special “horchataria” shops dedicated to serving it.

Where To Stay In Valencia, Spain

To enjoy Valencia to the fullest, rent an apartment in the city center. You can choose a modernist Spanish apartment in the El Carmen historical neighborhood, which is quite central. Other well-located areas for you to stay in Valencia are Ciutat Vella (Valencia Old Town), L’Eixample, El Cabanyal, Poblats Maritims, and Benimaclet.

Buñol is a small town located in the province of Valencia. As the festival is the main attraction of the city, most people opt for staying in the capital city of Valencia, which offers more options for things to do during a trip to Spain. Both cities are located within 40 minutes from each other, and a great idea is to can rent a car and travel from Valencia to Bunõl. You just have to take the A3 highway towards Madrid/Aeropuerto, and then take exit 322 towards VP-3031/Buñol. For your day trip to Bunõl, you can also get the train in the Estaciò Nord. The journey takes around 1 h 7 min.

A Guide To La Tomatina Festival

The History Of La Tomatina

Ever wondered why Spain hosts a food fight festival where people just have fun while throwing tomatoes at each other? We explain. While the origins of the festival are unknown, there’s a popular story that tells it all began by accident in August 1945. There was a religious parade taking place in Buñol, and a group of teenagers started throwing tomatoes that had fallen from the bed of a passing lorry. The tomato throwing became a thing, and it continued for a few years until it was banned in the 1950s by city officials. Later on, in 1957, the people of Buñol held a ceremonial tomato burial, tucking a tomato into a coffin to express their discontent. In 1959 the ban was lifted and La Tomatina became a Festivity of International Tourist Interest in 2002.

What Happens In La Tomatina?

La Tomatina is now held in honor of St. Louis Bertrand — the patron saint of Bunõl — on the last Wednesday of August. Regarded as the biggest food fight in the world, La Tomatina starts at 10 am with people gathering in the Plaza del Pueblo. At 11:00 am, a gunshot indicates the start of the tomato throwing, which lasts until 12:00 p.m., when another gunshot signals the end.

Here are some thoughtful tips and advice you need to know to make the most out of The Tomatina Festival.

CuddlyNest provides all accommodations to all travelers at the best price. Find unlimited travel inspiration on our blog and social media channels.

Here are some curated readings for you: