Original content owned & copyrighted by Green Global Travel. From Cinco de Mayo and Día de Los Muertos (a.k.a. Day of the Dead Festival) to tacos, tequila, and piñatas, traditional Mexican culture has become increasingly embedded in American popular culture. The incorporation of European and African cultural influences has transformed the country radically since the time of the ancient Aztecs and Maya. But the Keep Reading The post 40 Fascinating Christmas Traditions in Mexico appeared first on Green Global Travel.

The incorporation of European and African cultural influences has transformed the country radically since the time of the ancient Aztecs and Maya.

But the indigenous influences (especially Mayan art and agriculture) have left an indelible imprint on what we recognize as the culture of Mexico today.

Because around 80% of Mexicans identify as Catholic, Christmas in Mexico is an immensely popular holiday.

And while Christmas symbols such as Santa Claus and Christmas trees do have their place, Mexican Christmas traditions such as candle-lit processions, elaborate nativity scenes, and dancing are deeply rooted in the country’s Spanish history.

So here’s a look at 40 fascinating Christmas traditions in Mexico, from the Posadas and Pastorelas to Los Santos Inocentes, the Mass of the Rooster, and more!

READ MORE: The 20 Best Festivals in the World 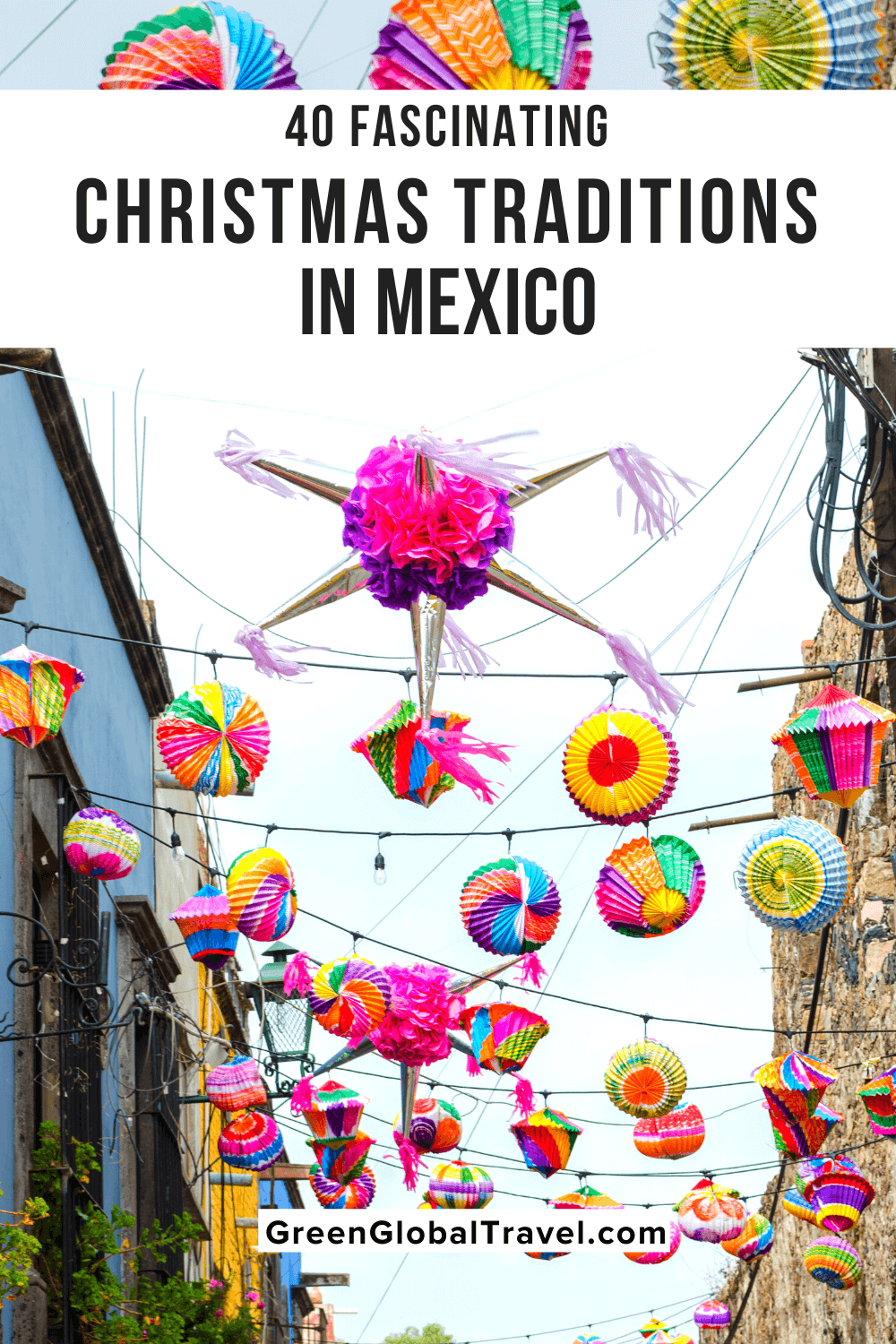 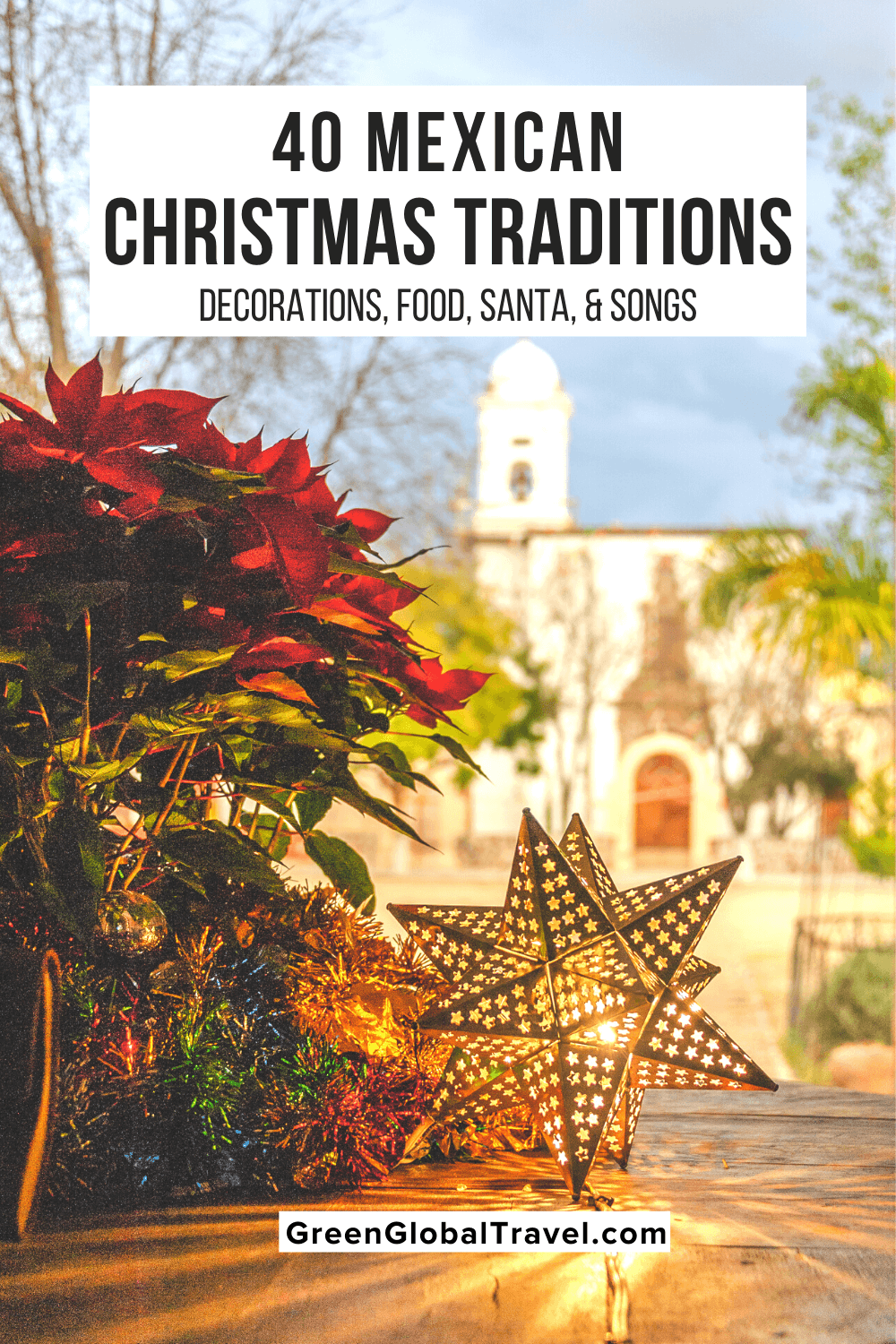 FACTS ABOUT CHRISTMAS IN MEXICO

ORIGINS AND DATES OF CHRISTMAS

1. When the Spanish explored the New World, they brought Catholicism with them. With that came Christmas, which evolved over centuries into the unique traditions of Christmas in Mexico today .

2. In Mexico, people celebrate Christmas from December 12 to January 6, with an extra holiday on February 2.

3. From December 16 to December 24, Las Posadas in Mexico find children carrying candles as they walk around to houses, singing and asking for shelter.

Posada means inn or lodging, so this tradition represents Mary and Joseph searching for shelter in the Biblical Christmas story.

On each night of the Posadas, a different family holds a party, where there is food, drinks, music, piñatas, and fireworks.

4. Another classic Mexican Christmas custom is Las Pastorelas. These Christmas plays depict the Shepherds’ journey following the Star of Bethlehem to find the Biblical Nativity.

Some of these plays can be funny, while others are more serious, showing the trials and tribulations the Devil put the Shepherds through en route to finding the Baby Jesus.

When they do find him, it represents the ultimate triumph of good over evil.

5. Christmas Eve is the main event in Mexico. It marks the end of the Posadas, which conclude with the main Christmas meal.

This night is known as Noche Buena, and it is when most families come together to celebrate. On Christmas Day, people continue feasting, but they’re often too tired to do much else!

6. At midnight on Christmas Eve, many families go to a special Mass, known as the Misa de Gallo (or Mass of the Rooster). Afterwards, there are even more fireworks than usual shot off to celebrate Christmas Day!

7. Mexicans also celebrate Los Santos Inocentes (Day of Innocent Saints) on December 28. This day honors the babies King Herod ordered to be killed in his attempts to kill the Baby Jesus.

Much like April Fool’s Day in the US, this Mexican Christmas tradition includes telling people bold-faced lies, which represents the trickery of the innocent.

8. New Year traditions in Mexico are also interesting. For instance, one custom is to eat 12 grapes– one at each of the 12 bell tolls at midnight. I tried it in my high school Spanish class, and it’s much harder than it sounds!

9. While some children in Mexico expect to get presents on Christmas Eve, in southern Mexico it’s common to receive presents on January 6– the Epiphany, or Dia de los Reyes, which celebrates the Three Wise Men.

10. Finally, February 2 is La Calendaria (the Candles). This is the final holiday related to Christmas in Mexico, and many people have large parties on this day. Some parts of Mexico, such as in Veracruz, host large festivals with parades and bullfighting.

READ MORE: The 20 Best Places to Spend Christmas in the USA

11. Pozole, which is traditionally served on Christmas Eve, is a thick soup made with hominy, chicken or pork, and chilis topped with greens.

This dish is a main feature of the traditional Mexican Christmas feast, which may also include roast turkey, roast pork, tamales, and salt cod.

12. Romeritos are another traditional Mexican Christmas food. This dish consists of a green vegetable called seepweed cooked in a mole sauce with potato and shrimp.

13. Ensalada Nochebuena, or Christmas Eve Salad, is made with seasonal fruits and vegetables, nuts, and citrus dressing.

14. Bunuelos are the traditional Mexican Christmas dessert. These fried pastries are sprinkled with cinnamon or topped with hot sugar syrup, and they can either be flat or round.

15. Ponche, a warm punch made with fruit, may also be served with Christmas dinner in Mexico.

16. Adults might be drinking Rompope, an eggnog-like drink with rum added to it.

Much like King Cake in Louisiana, it traditionally has a little plastic baby Jesus (or fava bean) in the middle. It is tradition that whoever gets the baby Jesus is his godparent for the year.

18.  Christmas piñatas are balls with seven spikes on them, which represent the seven deadly sins.

While piñatas are typically a fun and light-hearted thing, there is a sort of ritual to them in Mexico at Christmas.

First, covering the eyes of the person who hits the piñata represents blind faith. Next, the stick you hit it with represents virtue. Finally, the candy inside is a sweet reward for faith in God.

19. Nativity scenes, or Nacimiento, are one of the most popular Christmas decorations in Mexico.

Therefore, they are often very large and colorful. Some families do not put up Christmas trees at all, but put up Nacimientos instead.

Another Mexican Christmas tradition is to place certain figures in the Nacimiento at certain times, such as the baby Jesus on Christmas Eve and the Three Wise Men on Epiphany.

READ MORE: 20 Symbols of Christmas: The Meaning of Traditional Decorations

20. Poinsettias (which are also known as nochebuena flowers) are native to Mexico and are a popular Christmas decoration all around the world. They were originally cultivated by the Aztecs, and their red color symbolizes purity, which fits perfectly with Catholic Christmas traditions.

21. Luminaries, or paper lanterns, are another popular Christmas decoration in Mexico. In the Posadas, they represent lighting the way for Mary and Joseph on their search for a place to stay.

22. French Emperor Maximilian brought the first Christmas tree to Mexico in the 1860s, when he lived there. Once Mexicans saw his impressive tree, the demand for Christmas trees began.

23. Christmas trees in Mexico have become much more popular in recent years. You can usually find large, elaborately decorated ones in town centers all across the country.

25. The most authentic Mexican Christmas ornaments are those made with straw, tin, clay, and other rustic mediums.

28. The largest angel ornament ever made was also from Mexico: It measured 18 feet high, had a wingspan of nearly 12 feet, and it was made entirely out of recycled beer bottles.

29. Santa Claus was not originally part of Mexican Christmas traditions. He was not really introduced until the mid-20th century commercialization of Christmas by the United States.

30. Instead, the Three Wise Men have traditionally been the most important figures of Christmas in Mexico. They leave gifts for children to find on the Día de los Reyes, or the Day of the Kings.

31. In Mexico, jolly old St. Nick is known as either Santa Clos or Papa Noel.

32. The Three Wise Men, El Niñito Dios (Baby Jesus), and Santa Clos are all believed to give children presents in Mexico.

33. If Santa Claus does come to a house in Mexico, he usually comes on the eve of December 23rd or the morning of Christmas Eve to leave presents.

READ MORE: The History & Names for Santa Claus Around the World

35. On each night of the Posadas, Mexicans sing the traditional song, “Canto Para Pedir Posada.” People split into two groups, then they each sing alternating verses.

36. Another Mexican tradition is to sing New Year’s carols. For example, there’s “Rama Navideña,” about the tradition of carrying a branch adorned with images of the Virgin Mary and baby Jesus. Another traditional song is “Cinco Pa’Las Doce,” (5 Minutes to Midnight), which brings in the new year.

37. “Los Peces en el Río” (The Fishes in the River) is another traditional Christmas song from Mexico. It describes the Virgin Mary as she washes the Christ child’s clothes in the river.

40. “Ya Vienen los Reyes” is a villancio that’s particularly fun for children. According to Mexican tradition, the Three Wise Men bring children gifts on January 6, and this song is about the royal trio being on their way!  –by Sonny Grace Bray